After much thought, I've finally decided to start a blog! Since it's the beginning of a new year I thought it would be a perfect time to get started. My main goal in all of this is to be able to save some of the memories I have of our growing family and the boys lives. Pictures and videos are amazing memories, but there are so many things that happen and words that are spoken that you just can't get on film. Here's a little about each of the boys. 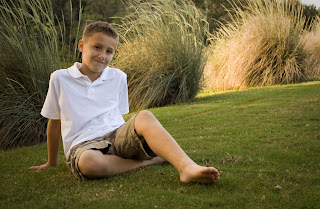 Jacob - Age 9 - He's a typical oldest child, responsible, cautious and eager to please. Jacob loves animals and plans to become a zoo keeper. He loves to travel and has quite a list of places he'd like to go. He's exceptionally smart, but tends to doubt his abilities. He's got an incredible imagination and is very creative. He also happens to be very kind, compassionate and generous. He's a wonderful older brother and he loves his brothers. He stays out of trouble and aside from an occasional reminder about his attitude, we rarely have any trouble with him. 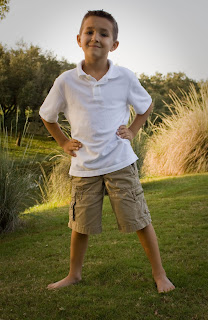 Keaton - Age 7 - The middle child. Keaton is in love with all things mechanical and wants to design and build cars for a living. He is independent, but plays well with others. He's constantly building things and taking things apart. Sometimes the taking things apart gets him into trouble (for example, smashing a robot against the wall to see what's inside). He's the kid that other kids want as a friend. He cries easily when he thinks he's in trouble or when things aren't right in his world. He's sweet and compassionate, much like Jacob, but is very deliberately compassionate. For example, he knows how I hate to be at home without any of my kids, so he'll ask if he should stay with me and keep me company even if he'd be giving up going somewhere he really wants to go. He loves his brothers and his family and especially his cars and magnets that he builds with. 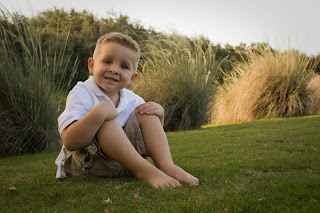 Gavin - Age 4 - The Baby. Gavin is sweet, cuddly and mischevious. He's big for his age and has been described as a "gentle giant" by his preschool teachers. He's a Mommy's boy and loves to sit on my lap, hug, kiss and snuggle with me. He adores his older brothers and wants to be just like them. He's prone to accidents and has knocked out his 2 front teeth and had stitches 3 times in his little life! He makes a lot of messes and I always wonder what's going on when he's quiet. When he was smaller I would find eggs broken all over the kitchen floor because he would go the refrigerator and throw them out. He loves cars and shares a room with Keaton. He's what some would refer to as "the golden child" because even when he's doing wrong, he's just so sweet and cute that it's hard to be mad for long. 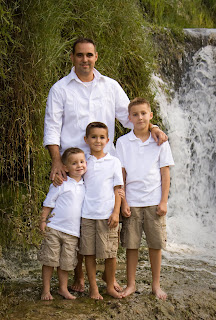 Joel - My Husband - We have been married for 12 years and still enjoy living life together. Joel has to be about the hardest working guys around. He's one of those guys who can pretty much do anything from building a house to building a business. Despite his busy schedule he still makes time for the boys and they LOVE playing with their Dad. When we got married I know people thought we were crazy... maybe we were, but I still think it was the best choice I could have ever made. 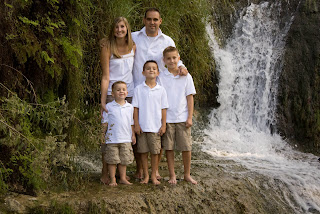 And then, there's me. Bristelle, Mom to 3 of the most amazing boys and wife to Joel. I love to do stuff with and for the kids, bake, spend time with friends and family (at least most of my family), plant flowers, scrapbook, sleep, eat out and my very favorite thing to do.....travel! I wish I had more free time and money and I would go SO many places.

So, this is my introduction to the bloggy world. I look forward to looking back over the posts in this blog in the coming years and remembering more of the little things in life.
Posted by Bristelle at 9:14 PM