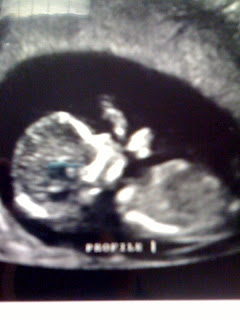 Isn't that just the sweetest profile! Seriously, the first thing I thought when I saw it was that it looks just like Gavin!

I went to have my 12 week screening ultrasound on Tuesday and honestly, I still kind of had this sense of fear going in. What if there was a little blob that hadn't grown without a heartbeat? It was a strange feeling, but I was so relieved when I saw a little face, hands and feet and especially a heartbeat. The heartbeat was good at 141 bpm and all of the fluid measurements for downs syndrome were well within the normal range. I'm still waiting on the blood work to confirm that we are super low risk, but I'm not really concerned.

We told the ultrasound tech that we had 3 boys and were anxious to know the gender of this baby. She told us that she and the other ultrasound techs had a non-scientific way to guess what the gender would be at 12 weeks. She said the actual doctor wouldn't have any part in this "guessing" but she would let us know what she thought if we wanted her to. The theory is, since all of the genitals are on the outside right now anyway, a little boy part will be pointing up and a girl will be pointing down. Of course we had to know what she thought, so, her best guess.....

It's probably a BOY!

I can't say that I'm surprised or disappointed, I just hope that all of our family and friends that are pulling for a girl won't be disappointed! We'll see if she's right in about 6 weeks!

Since I have never taken photos of my belly during my other pregnancies, I figured I'd better this time since this will be my last! It's a little blurry since it was taken by Keaton, but it will work. I've gained 7 pounds so far, so here's my little baby bump at 12 weeks. 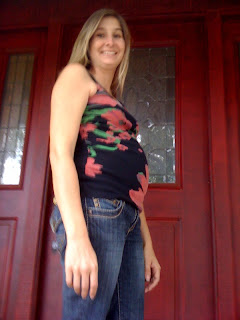 Posted by Bristelle at 6:40 PM