That's what little boys are made of!!

It's another boy and we are so thankful that everything looked good and healthy. Unfortunately, this little one does not have a name yet, other than Ghost Rider which was suggested by Gavin. It is VERY unlike me to go in for a sonogram without a boy name and a girl name picked. I never even looked at girl names this time, I knew he would be a boy. So there won't be any, "If you were a girl you would have been named..." Now we've got to figure out what he will be named! Joel suggested something that means "finished" or "the last one!" That being said, it was kind of bittersweet going in for what I know will be our very last ultrasound to find out the gender of a baby. But, 4 is enough, I guess....

Our little boy was not very cooperative during his picture session and we really didn't get any good ones. I've never had a 3D ultrasound and actually have never really wanted to have one, but the doc switched it on briefly to try to catch a good look at some of his organs and we ended up with this one of his face (or at least the part of his face not covered by his arm!) Most of the time he had both arms crossed in an "X" over his face and his head buried! 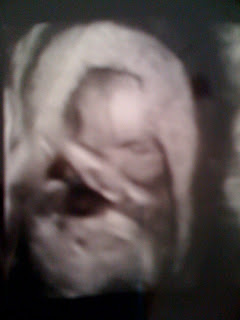 The boys were excited to have a new brother, especially Gavin and Keaton. Keaton says that girls are too sassy and so it was better that it was a boy. Gavin just wanted it to be a boy, so he was thrilled. Jacob said he was glad he was healthy and would have been just as excited for a girl. Joel was honestly indifferent to the gender and truly just prayed for a healthy baby. The families were glad he was healthy, but being that there are no grand-daughters on either side of our family, I know they were all pulling for a girl. And I wouldn't be being honest if I didn't say that although I knew all along this baby would be a boy and I am excited for his arrival, it is a little sad knowing I will never have a daughter. I will never have a little girl to dress in pink or princess costumes, never have a tea party birthday, never have anyone to take for a fun glittery pedicure, never help pick dresses for prom or her wedding and never have the experience of my daughter giving birth to new life.

So, I am the mom to 4 boys now. I look forward to what the years ahead will bring and the joys of raising boys!
Posted by Bristelle at 7:09 PM