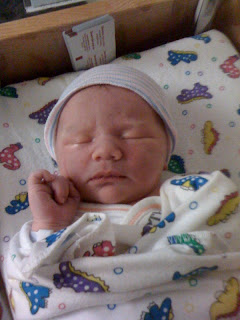 After much uncertainty about whether to go in for a possible induction, we decided it was the best choice for our family. There was a field trip that Joel was supposed to go on planned for Keaton on Thursday, the kids were out of school on Friday and Halloween was Sunday, so considering the baby would be 4 days past due by the 27th, we decided to check in to the hospital on Wednesday morning. I really wanted to avoid having a pitocin induced labor if at all possible, so we decided to just go in and have the doctor break my water. We arrived at the hospital at 5am, started some IV antibiotics and then the doc came in at 8. I was having some contractions show up on the monitor, but they weren't very strong. She said I was about 2.5cm dialated and 65% effaced at that point. She broke my water at 8:05am and said she'd be back between 12 and 1 to check on us. Joel and I started walking the halls and the contractions were immediately 5 minutes apart. By about 10:30 they were 3 minutes apart and getting much stronger. After having walked the halls for 2 hours or more my legs were getting tired, so we decided to hang out in the room for a while. As noon approached I told Joel that I'd better be making some progress because I was pretty uncomfortable. I was expecting to be 5-6cm by the time the doc came back and if I wasn't, I may seriously start considering an epidural. When I labored with Gavin, I didn't get to the hospital until I was 5-6cm and it made it much easier to not consider pain relief options. When you're sitting in a hospital room for hours it makes getting an epidural sound much more enticing. The doctor arrived at about 12:30 and I was 5cm and 100% effaced. She was pleased with the progress we had made and went back to see patients in her office across the street knowing we'd be calling fairly soon for delivery. Around 1:30 I was in extreme pain and thought it was about time to start pushing. The nurse checked and said there was a tiny bit of cervix left, but she was going to call the doctor anyway. People started flooding our room, taking the bed apart, turning on lights and warmers and getting ready for delivery. When Dr. Meritt arrived she checked me and said she was sorry but we weren't ready... she thought I was only 8cm. At that point I was in so much pain I was desperate for it to be over. I told her she had to help me have the baby. She told me she was sorry but it wasn't quite time and offered me an epidural but said it would take 30 minutes to get. I just wanted to have the baby. She was about to leave and go back to her office but she decided to check me again and I was 10cm! I was so relieved. There's nothing like the sinking feeling you get when they tell you it's time and then decide it's not really. Watching them scurry around taking things apart and then putting them all back together is horrible. Now people were scurrying around again taking things apart and getting the doctor gowned up for the second time. I was clenching the left side of the bed rail and have absolutely no idea where Joel was - he says he was on the right side of the bed and was rubbing my back. My eyes were closed and I really can remember nothing but the pain, hearing them discuss how high my heart rate was and an oxygen mask being placed on my face. After pushing about 5-7 times, baby Colton made his grand entrance. I barely opened my eyes to look at my new son when they laid him on my chest for the first time. I was just so relieved for it to be over. Joel was across the room with the baby as the nurses cleaned him up and they were all talking about his red hair. One of them came over to me and said, "HER hair is so pretty! SHE has the prettiest red hair!" My automatic response was, "Thank you!" and then I realized what she said...did I just have a girl?! I called out, "Wait, wait! It's a boy, right?" They confirmed that he was indeed a boy, but for a split second I was in complete shock! It was shocking enough that he had red hair, but a red headed girl was not something I was prepared for at all. Colton had a lot of bruising on his face, apparently from coming out so quickly, but besides that, he was perfect scoring an 8-9 on his APGAR. He continued to cry for about the first 45 minutes of his little life, presumably from his hurt and bruised face. Once he was cleaned up Joel brought him over to me to hold and really see for the first time. He was perfect and precious and looked so much like Gavin did at birth. This was the baby that I longed for, prayed for and thought I may never have and I was completely in love with him. The love a mother has for her baby is something that never changes, no matter how many babies you have. I may even appreciate my sweet little miracle more, having had the experience of how quickly my other babies have grown.

Later that evening we were able to introduce Colton to his 3 older brothers. As we expected, they were all thrilled and as sweet as can be. Joel captured their first glimpses and reactions on video, so I will be able to treasure those moments forever. Here we are, our new family of 6. 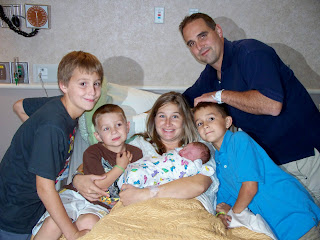 Gavin was worried about leaving me alone in the hospital. He started tearing up when it was time for him to go because he wasn't sure where I would sleep or how I would get food. It was very sweet!

All in all, it was a wonderful day with a perfect ending. As always, the horrible pain of labor was completely worth it and I'd go through it all over again to experience the joy and miracle of life. Sadly, Colton will be my last little baby (at least according to my dear husband... I don't know that I'm 100% ready to say that he is absolutely the last one!) and I am treasuring and loving every single moment, even the ones that are painful or that happen in the middle of the night!
Posted by Bristelle at 4:44 PM